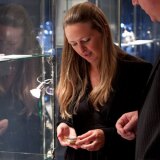 Joanne Lewis joined Sotheby’s watch department in 2004 having previously worked for another leading London Auctioneers in their clocks and watches department. After graduating with a BA in Applied Arts in 1997 Joanne went on to complete a post graduate diploma in History of Art.

Under her leadership in watches, Sotheby’s London held one of its most successful horological single owner sales, The George Daniels horological collection, with a total of 8,503,625 GBP. She has also worked on many other important watch collections such as The Celebration of the English Watch and the Masterworks of Time collection.

In 2011 she became a Freeman of the Worshipful Company of Clockmakers. Joanne is especially interested in the craftmanship of early pocket watches and vintage timepieces. With her many years of experience, she has a deep understanding of the market.