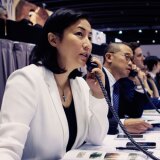 Patti Wong, Chairman of Sotheby’s Asia, is one of the most experienced Asians working in the auction world today. She has extensive knowledge in dealing with clients throughout the Far East and has represented major Asian collectors at most of Sotheby's important auctions worldwide for over two decades.

Mrs Wong was based in London for almost fifteen years, during which time she held the post of Head of Private Client Services Department, followed by her appointment as Chairman of Sotheby’s Asia in 2004. Mrs Wong has been instrumental in the significant expansion of the company’s client base in Hong Kong and Southeast Asia, building access to some of the most powerful buyers in Asia.

Educated both in Hong Kong and the United Kingdom, Mrs Wong received her bachelor’s degree in Monetary Economics from the London School of Economics, followed by a post graduate diploma in Asian Arts at the School of Oriental and African Studies, London University.