Anatomy of an Artwork: A Gupta-influenced Figure of Padmapani in a High-Tang Style

C hina's sculptural tradition reached its most mature phase during the Tang dynasty (618–907), an era when monks and pilgrims frequently travelled to North India, the spiritual home of Buddhism, in a quest for knowledge and inspiration. The great artistic tradition of Gupta India (3rd to 6th century) increasingly provided a rich source of inspiration to Tang artisans.

This finely cast and richly gilded figure can be identified as Padmapani – a manifestation of the Bodhisattva Avalokiteshvara – by the lotus blossom at the left shoulder. The figure, depicted seated in the mudra, or pose, of lalitasana, is adorned in sumptuous beaded jewellery with hair dressed in a high top knot. This sculpture embodies the style of the high-Tang period with its sensitive treatment of the natural curves and flow of the body, influenced by Indian art, and characteristic details including rounded face, well-modelled cheeks and opulent jewellery.

Padmapani is framed against a nimbus – a crown of radiating light rays – enclosed within tongues of flame.

The Bodhisattva Padmapani, which means ‘lotus holder’ in Sanskrit, is clearly identifiable by the lotus blossom at the left shoulder.

Padmapani is generally depicted as having a youthful, noble appearance. Here, the opulence of the jewellery also serves to convey his worldliness. As a bodhisattva, he has vowed to remain in the world until all sentient beings achieve enlightenment.

Padmapani is seated in lalitasana, a mudra in Indian art literally meaning ‘pendent posture’. In English, it is usually called ‘royal ease’, as encapsulated by the relaxed, aristocratic posture here.

The sensitive curves of the body and flowing drapery reveal the influence of the Gupta Empire, with resonances of the Hellenistic tradition. 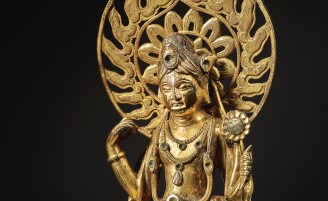