Sotheby’s: When and why did you start collecting?

David Ross: There were two things that I remember being influential when I began collecting. I was in New York and had arrived a day early for a meeting in 2000, and Bridget Riley had a retrospective at the Dia Foundation. I remember going around it and being totally transfixed. I was really struck by the progression of her work over the decades and how it had evolved and how she had always maintained such a high-quality threshold with what she had done.

So Bridget Riley started it all off?

Before that I had a very interesting lunch with the Duchess of Devonshire, and she talked in a very animated way about how her responsibility was to keep the Chatsworth collection current for her generation. As a result of which, she’d established relationships with some of the great British artists, including Lucian Freud, Allen Jones and Stephen Conroy. I was struck that she shared with me the passion and pleasure she had got from collecting artists that became her friends. And that was what sent me in the direction of a collection that was current for my generation, but also focused on British artists.

I worked out that if I was collecting global artists, my time and network would never be broad enough to meet all of them and, therefore, to concentrate on just British artists within my lifetime would give me the opportunity to really focus on something that was manageable.

Have you met all of the artists that feature in the sale?

Not all of them, but I’ve been involved on a personal level with lots of them. It’s not only the relationship with the artist, but also the back story of each piece that takes a picture from one level to another in terms of your understanding. For example, Allen Jones and his bus paintings. They were conceived whilst he was sitting on the bus, going out to college in Croydon, on occasion, with Bridget Riley. And you begin to understand his idea of looking through the window and that relationship between travel and what was going on around him. These things are important in the context of understanding what he was trying to achieve.

Is it fair to say you like to fully understand the backstory behind a piece before you make the purchase?

How did you select the works to be offered at auction?

The vast majority of them are early pictures and I think it’s perfectly reasonable that other young and aspiring collectors of British art should have the opportunity to access some of these. I don’t believe in pictures being in storage, and I have always said that my collection should always be on view. But the reality is, I’ve got a hundred pictures, which is more than I have room for. So, something had to change.

Did you find it hard to choose what to put in the sale?

I don’t like selling anything. I don’t want to sell anything, but I would prefer these pictures to be on display somewhere rather than in storage. My philosophy is this: No artist ever paints a picture so that a sole collector can hang it in their house. They paint a picture because they want to challenge you, or they want to say something, or they want to make an observation and create a dialogue. My approach has always been that I should loan pictures because that dialogue is more effectively undertaken through the work being seen in museums and galleries. But what no artist wants is for a collector to put it into storage. If I’m honest about that part of my philosophy, I am compelled and duty bound to sell works that it’s not in my nature to sell at all.

You are obviously well-researched and invested in each piece in the collection. Are there any stand-out stories behind any of the works in the sale?

He and his wife became very good friends of mine and I’ve continued to build on my collection of his work. He’s been a great friend of mine over many years and is a lovely man. I think some of his output in the early and mid-60s was amongst the best of the best of the British Pop Art movement, and an incredibly important artist in that context. And I’ve known Marc Quinn since the very early days, I used to live with his brother at university.

If I had to ask you to pick a favourite from what you’re selling, what would you say?

I’d find that very difficult, because it doesn’t work like that and trying to distinguish between one or the other is impossible. There are some definite stand-outs such as the Gilbert & George, and the Peter Blake.

I’m assuming that you’re still acquiring works. Is your collection going in a different direction now?

By definition, a collection evolves and, as part of that evolution and moving forward, you focus on different pictures and different artists.

Yes, only British art. There’s a very significant focus on British Pop Art from the 60s. Then it moves into School of London, with some great examples by Frank Auerbach, Leon Kossoff, Lucian Freud, and Gilbert & George. And the YBAs play a part as well. Iconic British artists are at the core of the collection; Riley, Hockney, Gilbert & George, Patrick Caulfield, Allen Jones.

What would your advice be to someone who wanted to start building a collection today?

I think you should buy pictures that you love. Be clear about what it is that you’re trying to achieve, and have an element of focus or, if not focus, a theme around which you try to build. I’m very clear, British art since 1965 is really what I’m all about. That gives me a really clearly defined universe in which to hunt for artists and new opportunities. If I was trying to buy American art as well, I don’t have the capacity to get into the level of detail I have with British art. Because I’m quite focused, I know what things I should be interested in and where I should take the collection.

Tell us a bit about your Foundation, why did you launch it?

The Ross Foundation invests mainly in young people, giving them opportunities they may not get otherwise. The Foundation is particularly focused on young people from the East Midlands, which is where I grew up. 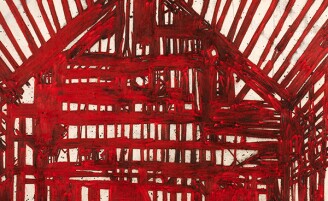