Art is the key to bridging generations within a community, with works that express shared ideas of beauty and experiences of diverse cultures. Following the successful debut of ‘Bridging Generations: Property from an Important Southeast Asian Private Museum’ at Sotheby’s Hong Kong Fall Auctions Series, we present the next edition of contemporary works from the single-owner grouping.

The emergence of collector-founded private art museums in Southeast Asia have given visibility and access to art in places that would otherwise lack government support or infrastructure for art education. To meet this need, one visionary founder of such a private institution built a collection of historically significant modern and contemporary artworks on view to the general public. Given the important role of private museums in the region, the founder intended a space that would serve not as a replacement for the storeroom, but a place where interactions with art can be an enduring experience – one that can be repeated and renewed.

Thus, ‘Bridging Generations’ was conceived, a passion project born out of the love and enjoyment of art, and a name alluding to the collector’s ambitions to connect different era from the old masters to younger, contemporary artists. The intention is to foster an exchange of ideas through the ages which in aggregate would create a strong sense of cultural identity and a powerful connection between art and the community.

Leading the contemporary works from the collection is Seneng Kuwilarang Regane by Eko Nugroho, originally commissioned by BMW Indonesia in 2009. The blue, black and white painting features monsters and strange creatures that have long been the artist’s hallmark. The Javanese saying “seneng kuwi larang regane” expresses the idea that money can’t buy happiness, a notion that has never been truer than in today’s modern life where people are compelled to find fulfilment through material wealth. Eko Nugroho captures in his artwork the power and energy of everyday urban life. The work references two significant years in recent Indonesian history: 1998, which marks the falls of Suharto and the start of reform, and 2002, which refers to the deadly terrorist bomb attacks in Bali.

At the Hochschule fuer Bildende Kuenste in Germany, Melati Suryodarmo studied art intensively under the guidance of Anzu Furukawa and Marina Abramovic. During 2001– 2002 Melati ran a postgraduate program at the same institute. For 20 years, Melati has presented her performance works at international festivals and actively participates in art exhibitions all over the world. Among the many important exhibitions include the Asia Pacific Triennale (2018), Biennale Jogja Equator # 1 (2011), Singapore Biennale (2015), and Bangkok Art Biennale (2020). In 2020 to 2021, she had her biggest solo exhibition, “Why Let the Chicken Run?” at the MACAN Museum, Jakarta.

Arin Dwihartanto’s works mostly uses resin as his painting medium, interested in the juxtaposition of industrial material with abstract form, where the colour highlights the state of man-made nature. In this special series of painting, he scanned the x-ray of human body and transformed the visual to canvas. Arin Dwihartanto Sunaryo is one of a group of prominent young Indonesian artists that emerged after the reformation era. The concepts of Arin’s works challenge the notion of painting itself, repositioning painting in the realm of contemporary art today.

Born and based in Bandung, Christine Ay Tjoe is one of the most sought-after female contemporary artists. Liquid Talk with Me Again is an example of Ay Tjoe’s diverse oeuvre as she explores mediums of photography, painting, and installation. The doll-like figures featured in the work suggest notions of play, religion, and human relationships. The work should be understood as stages or phases in the process of creation, which would inform her largely abstract paintings that sometimes incorporate figures – whether partially or in nature. These painting embodies the emotional quality and thematic vivacity of Ay Tjoe’s oeuvre.

The title of Tintin Wulia’s video installation Nous ne notons pas les fleurs refers to a dialogue in ‘Le Petit Prince ‘ by Antoine de Saint-Exupéry, in which a geographer tells the titular prince that geographers do not record flowers because they, unlike the earth, are ephemeral. Nous ne notons pas les fleurs explores ideas of migration and impermanence of political borders set in contrast to the tendency to freeze them – a complex discourse expressing the artist’s commentary in eight video channels. The artwork begins as a multi-coloured installation of flowers and plants along with a map of the world. The audience is invited to participate in an interactive experience, shaping parts of the map, then tracing their history of movements. 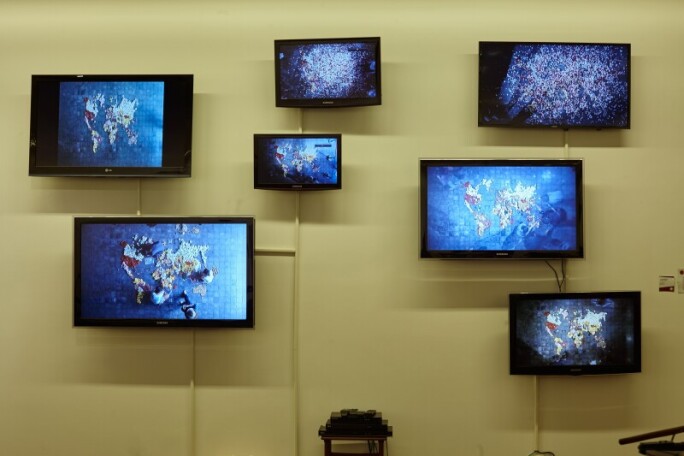 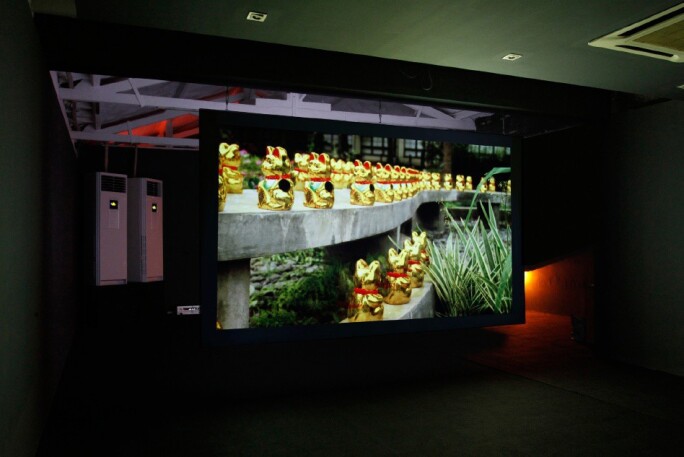 Tromarama is an art collective founded in 2006 by Febie Babyrose, Herbert Hans and Ruddy Hatumena. Engaging with the notion of hyper-reality in the digital age, their projects explore the interrelationship between the virtual and the physical world. Tromarama are widely considered one of Indonesia’s most exciting rising talents and have been exhibited around the world. The Lost One is a video project that plays with the idea of everyday objects in their surroundings, investigating each in search of the 'one' that might offer an answer to the meaning of life.

Ugo Untoro is an artist steeped in literature. An accomplished poet and writer of short stories, Ugo Untoro uses the notion of text as part of his visual art practices. Igau is part of series of text paintings that remind us of art works as narrative and as a form of storytelling.

Born in 1959 in Indonesia, Agus Suwage received his M.F.A. in graphic design from the Faculty of Art and Design at Bandung Institute of Technology in 1986. His works have been featured in about 200 exhibitions around the world, and his works are included in most comprehensive collections of Southeast Asian contemporary art. Jawara Lokal is part of a series in which Suwage investigates the recurring themes of food politics, identity, human desire, and the world of animals. In this work, the artist offers a perspective of meat trading that reveals the many contradictory aspects of the politics of food. In the centre of the canvas a cow is shown adorned with accessories, and the apparent 'local winner' of a contest, an event identified as typical part of the Madurese community. Around the cow, a woman is selling slabs of meat in a stark counterpoint to the idea of a prized animal.

Citra Sasmita has been inspired by the changing role of women and their impact on Balinese tradition. In the painting Metamorphosis, six partially covered female figures carry symbols, such as a stone, cactus, knife and scissors. In addition, there is the significant imagery of the placenta (ari-ari) and a cloth bearing the pattern of gold roses. In Balinese belief, the ari-ari is a younger sibling, generally buried close to the house. Drips of paint that look like roots reached down below from the feet shown in contrast against background of green. In Bali, the fabric shown would typically be used to cover trees, architectures or figures during traditional celebrations. Here, the cloth drapes human forms in unconventional manner, prompting new associations and meanings.

More from the Collection 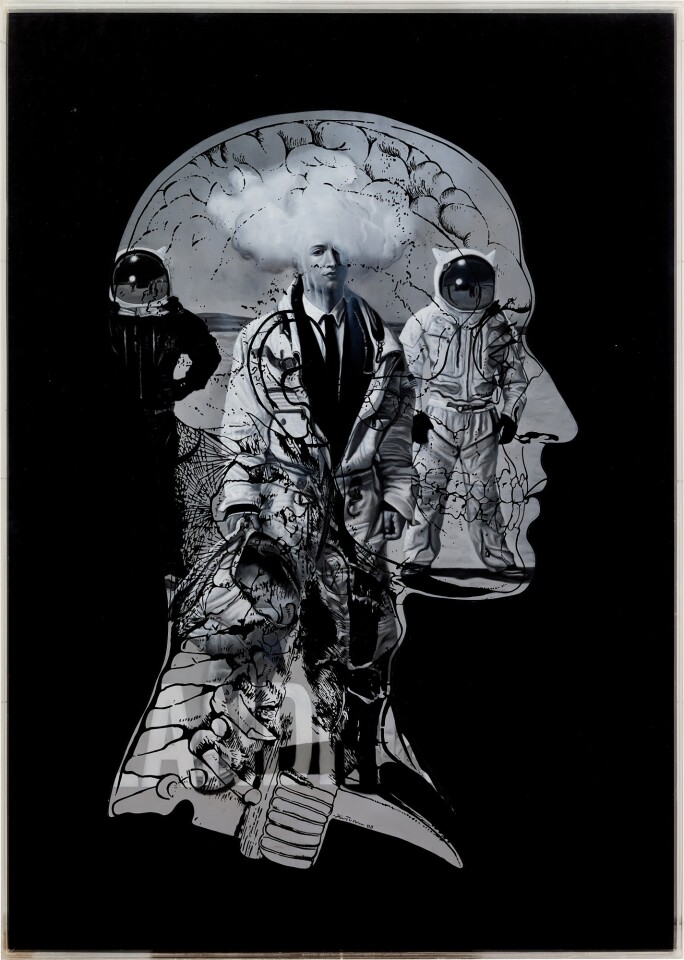 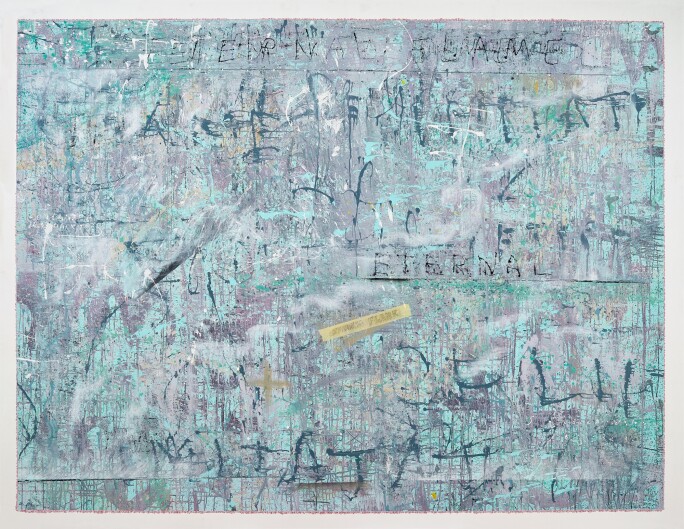 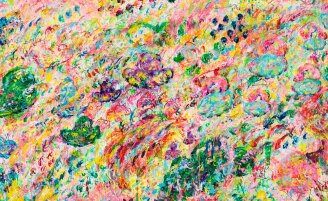