Everything You Need to Know About the Hermès Birkin

By Olivia Pennington
Shop a curated selection of Hermes Birkin bags in Togo, Ostrich, Crocodile and more. All available for immediate purchase.

Brief History of the Hermès Birkin


The Hermès Birkin bag is an icon in the fashion world, highly sought-after by celebrities and the handbag-obsessed. The Hermès bag’s design is a collaboration between Jane Birkin and Hermès CEO Jean-Louis Dumas. The two met on a flight from Paris to London in 1984. Birkin confided in Dumas that she lacked a purse with appropriate functionality for her fast-paced lifestyle. Out of this conversation, the Birkin 40 in chic calfbox leather was born. The Birkin’s practical design featuring two rolled handles, a flap top, clou “feet,” and a lock closure continues to resonate today.

The Birkin remains a coveted Hermès handbag thanks to its signature Hermès craftsmanship and exclusivity. This Hermès bag takes expert artisans a minimum of 18 hours to create and is marked with a code that identifies its year of creation, the workshop it was crafted in, and the artisan who made it. To buy a Birkin directly from Hermès, customers must have a purchase history with the brand. Hermès only allows boutiques to purchase a select number of Birkins on a bi-annual basis and the style of Birkin delivered to boutiques is rarely known ahead of time. As a result, customers must either make do with available Birkin bags or patiently wait for the style they want to become available. An Hermès Birkin is a fantastic investment piece whose classic beauty withstands the test of time. Birkins range in price from about $10,000 for a basic leather bag to over $200,000 for a crocodile and diamond style. The bags are among the more searched for Hermès bags.


The Birkin comes in four sizes: Birkin 25, Birkin 30, Birkin 35, and Birkin 40. A Birkin’s size is determined by its length in centimeters across the base. For example, a Birkin 35 has a length of 35 centimeters across the base of the bag. The Birkin 25 is large enough to fit your daily necessities while the more popular Birkin 30 offers space for necessities as well as a makeup bag or a tablet computer. The Birkin 35 can fit your essentials and a small laptop while the Birkin 40 is frequently used as a travel bag thanks to its spacious interior. All Birkins have one interior side pocket and the rest of the bag is a single compartment. The bottom base holds it shape and doesn't buckle even after years of use.


The Birkin has been reinvented many times since its introduction in 1984 with the help of leathers, exotic skins, and limited edition releases. The bag first appeared in calfbox leather, a heritage leather and the oldest leather used by Hermès. This leather has an extremely smooth finish that gives Birkins an extra glamorous look. The material is susceptible to scratches and watermarks, but over time these imperfections blend into the bag, adding a mirror-like texture. To ensure that your calfbox Birkin remains in good shape, keep it away from rain and lightly buff any imperfections to blend them into the leather. Togo leather is another classic option for Birkin bags. Introduced in 1997, this calfskin leather was named after the Togolese Republic in Africa. This leather is the result of an intensive drumming process that brings out the material’s natural features. Togo is a supple, matte material, but becomes shinier and softer over time. It has a round and irregular grain with pronounced veins and wrinkles. This material is also scratch resistant -- a major perk for both collectors and those searching for a durable Hermès bag.

Another standard Birkin leather is Clemence, which is made from cowhide. This leather is softer, heavier, and less durable than Togo. Clemence Birkins will often lose their shape over time. Clemence has a shallow grainy texture, which creates a matte effect. Birkin bags made from Clemence leather have a casual feel and make no effort to hide their age. Epsom leather is Clemence’s opposite: Epsom is very rigid and will hold the Birkin’s shape through years of wear. Epsom is an embossed leather, meaning it has no natural grain, and is completely scratch and water resistant, which makes it easy to clean. Epsom leather is a very practical material. Like Epsom, Fjord leather is highly durable and also waterproof, soft, matte and heavy. Evercolor leather provides a Birkin with suppleness and it comes in a wide palette of “forever” colors. First appearing in 2012, this material is satiny with a small, regular grain obtained by printing. An all-new heritage leather option is the Barenia Faubourg calfskin that Hermès began using in 2016. It has a minuscule printed grain and feels waxy to the touch. This leather will darken where it is handled. You can find Hermès leather Birkin bags in every color of the rainbow on the secondary market. Hermès itself only releases Birkins in select colors every year. Thanks to the variety of Hermès leathers, Birkins can cater to each individual wearers’ personality.


Birkin handbags also come in exotic materials such as ostrich, lizard, crocodile, and alligator skins, available in glossy or matte finishes. Birkins made from exotics are considered more exclusive and unique than leather Birkins and fetch a higher price point. Crocodile is the most expensive exotic material and comes in two styles: Niloticus crocodile and Porosus crocodile. Niloticus crocodile handbags will have the symbol “••” next to the Hermés logo stamp while Porosus crocodile handbags are indicated by the symbol “^”. The most expensive Hermès Birkin, the Himalaya Birkin, is constructed out of Niloticus crocodile skin dyed in a white and grey gradient. The coloring is intended to evoke the white snow of the Himalaya Mountains. Alligator skins are the next most expensive exotic and differ from crocodile in that the plates are larger and non uniformed, softer to the touch, and poreless. Alligator skin is indicated by a small square adjacent to the Hermès logo stamp. Lizard skin is generally only used in smaller bags and small leather goods. As a result, Hermès typically uses the material for the smallest Birkin bag -- a Birkin 25. Thanks to the skin’s ability to absorb pigments easily, lizard Birkins are available in a vivid array of colors. Like crocodile, this luxurious skin has two styles. Niloticus lizard is identified by the “-” next to the Hermès logo stamp and Varanus Salvator lizard is indicated with a “=” symbol. Out of all the exotic materials, ostrich has the most entry-level price point and is the most durable. This material has been used by Hermès since the 1920s. Identifiable by its follicles, the points from which the feathers grow, this skin has a very pronounced dual tone. In order to prevent follicle damage, Hermès flattens the follicles and triples the skin. This material absorbs oils and will darken over time where it is frequently touched. Like lizard, this material is available in an assortment of vivid colorways. Ostrich skin bags do not have a special symbol stamped on the bag. 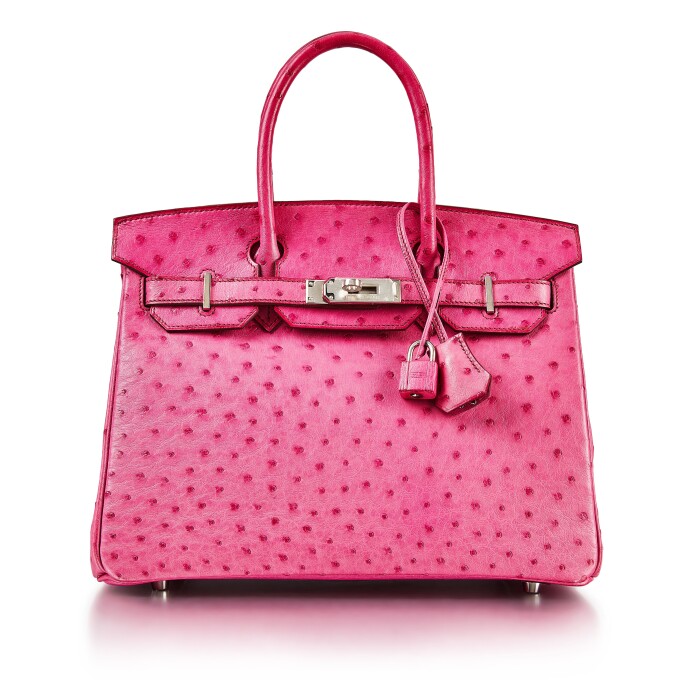 
Hermés Birkin Sellier was first introduced in 2010 as a limited edition option and was reintroduced in 2020. The classic Hermés Birkins have stitching on the interior of the bag while the Birkin Sellier has stitching on the outside. The Birkin Sellier is also more structured than the classic style, also known as Retourne. The stitching on the inside gives the bag a more relaxed look versus the exterior stitching. The Birkin Sellier is also potentially a better style for humid Aison countries since it is less liekly to lose its shape versus the traditional non-exotic Birkin bags. The capacity inside the bag is very similar to the traditional birkin. The only potential downside to the more structured style is that the corners could be more prone to getting scratched in crowded cities. While the retail price of the Sellier Birkin is only slightly higher than the classic Birkin, the bag generally sells for a premium in the secondary market due to much more limited availability.


Hermès limited edition Birkins are the rarest Birkin bags because of their restricted release. Limited editions are treated as sculptural artworks to be collected and cherished. A fantastic example is the Hermès Shadow Birkin designed by Jean Paul Gaultier and first introduced in 2009 and then released in limited quantities ten years later. This Hermès bag draws influence from trompe l’oeil. This Birkin bag features a lock closure that is directly sewn onto the bag as a leather debossing without metal hardware. This technique creates the illusion of buckle straps dangling from the Hermès bag. A more playful limited release Birkin is the Fringe Birkin, which features a panel of colorful leather fringe on the face of the bag. The Hermès Faubourg Birkin is one of the most sought-after limited edition Birkin bags. An homage to the Hermès storefront on Rue du Faubourg Saint-Honoré in Paris, this bag features three windows with orange awnings and an alligator top flap. This tiny 20 centimeter Birkin comes in four variations. 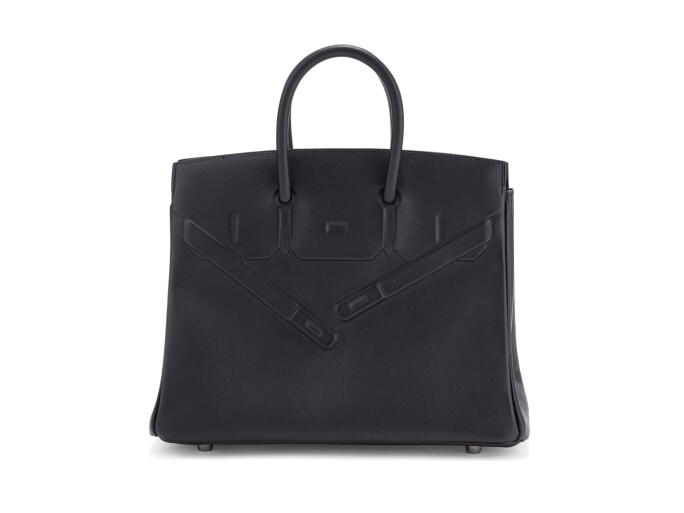 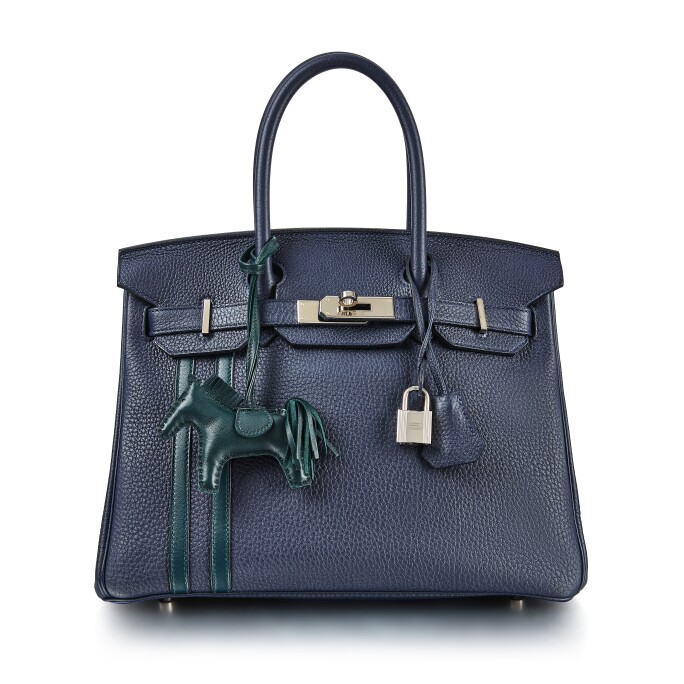 
Hermès also offers Special Order Birkins for VIP customers who have demonstrated considerable loyalty to the brand. These Special Order (HSS) Birkin bags began to feature an embossed Horseshoe Stamp next to the Hermès logo stamp about ten years ago. The stamp has earned these ultra-rare Hermès handbags the name Horseshoe Stamp bags or HSS bags. HSS Birkins used to be highly customizable, but now the options for these Hermès bags are more restricted due to high demand. Today, most VIP clients are allowed to choose just two colors to appear on a single Special Order bag. The two colors can both appear on the outside of the bag, or the bag can have one color on the inside and the other on the outside. The stitching can either be in the same color as the leather, or can contrast the leather. The vast majority of Special Orders are crafted in leather, including epsom, togo, chevre, clemence, swift and the new taurillon novillo. Ostrich bi-colors are occasionally available as well. Crocodile and alligator Special Orders are extremely rare, and make them truly a unique collector's item. Given that Horseshoe Stamp Special Order bags are rare and require such a long wait time and a strong purchase history, they sell often sell at a premium in the secondary market. But owning such a unique bag makes the purchase a worthwhile investment for the Hermès collector.


While Jane Birkin may have been the first celebrity to be blessed with a Birkin bag, many others have followed suit in acquiring the luxury item. Victoria Beckham, Kim Kardashian, and Kate Moss are just a small sampling of women who have added the Hermès handbag to their collections. Beckham is rumored to have a collection of Birkins worth over two million dollars, and has been pictured with quite an assortment of the Hermès bag over the years. Meanwhile, Kardashian has been seen wearing a hand painted Birkin by artist George Condo that is considered a priceless work of art. Moss is frequently seen out with her white Birkin with palladium hardware, which she wears with the flap and lock closure open for a casual off duty look. 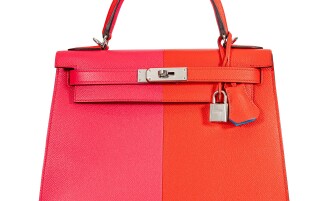