Masterworks by Joseph Crawhall from the Coats Collection

By Sotheby's
Sotheby’s are privileged to be offering a selection of significant and rarely seen works by Joseph Crawhall (1861-1913) in our annual Scottish Art Sale (online 18-24 November). These works represent the most exciting group of Crawhall's paintings to appear on the auction market in living memory. The group originally come from the Private Collection of William Allan Coats (1853-1926), one of the most important art collectors in Scotland at the turn of the 20th Century.

The grandson of James Coats (1774-1857), William Allan Coats joined the family company, J. & P. Coats, eventually becoming the director of what was then the biggest thread-making firm in the world. Soon after he joined, the company was floated on the stock market in 1890, making William and his brothers extremely wealthy. He began collecting art the same year. His tastes centred on the artists of the Barbizon and Hague Schools, purchasing works by Corot, Daubigny, and Josef Israëls, amongst others, in his early trips to the dealer Thomas Lawrie & Son. He would later go on to acquire a number of works by Eugène Boudin and Adolphe Monticelli from Alexander Reid between 1899 and 1911.

Despite this French inflection, his collection grew to include works by more local artists and, most notably, those of Joseph Crawhall. From the early 1900s, Coats began to acquire the artist’s paintings with a regularity and passion only matched by his contemporary Sir William Burrell. Crawhall was a technically brilliant and innovative painter, working both with watercolour and gouache. He was born near Newcastle in 1861 and was active in Scotland throughout his career whilst also traveling frequently to Morocco and Spain. Traditionally grouped with the artists known as the Glasgow Boys, who were active in and around the city between 1880 and 1900, Crawhall’s art is defined by an attention to detail and design, composition and colour that remained unsurpassed by his peers.

Many of Crawhall’s works in this sale are emblematic of his highly sophisticated yet economical painting style. The Tiger (lot 1) and A Lady Alighting from a Hansom Cab (lot 2) perfectly demonstrate his ability to evoke natural movement and mood through sharp delineation. This search for perceptual precision and a move towards decorative naturalism lies in the influence of Bastien-Lepage, Whistler and, perhaps most notably, the careful articulation of Japanese art. Whistler himself considered Crawhall’s paintings to be ‘masterpieces of observation.’ In a similar way, Four in Hand (lot 4) is executed on a fine linen sparingly covered and largely untouched, lending the work an intimate quality. Beginning to paint on linen after he found himself without paper on a trip to Bristol in the early 1890s, it is a testament to his skill that his works retain such finesse despite the inherent challenges of the medium. Indeed, Crawhall's peer and fellow Glasgow Boy, Sir James Guthrie, writing after Crawhall's death comments on the mastery of his medium:

‘[Crawhall] has always been a consummate artist, the perfection of the means for the end he had in view, the fineness of his instinct for form, colour and design; the rare knowledge of life and movement and the even rarer application of that knowledge to an art of the most exacting sensitiveness and power - these things will always give him a unique place. Such a combination exists in none else known to me and his work throughout has, in my mind, borne the stamp of a master.’

Crawhall’s depictions of animals, however, go beyond the decorative or superficial. Rather, they are suffused with a profound understanding and respect of the natural world. Painted primarily from memory over a period of several weeks, his works represent a synthesis of knowledge and humanity which elevates his subject matter through an eloquence and elegance that remains unmatched. As Roger Billcliffe has remarked, Crawhall’s paintings are ‘his attempt to make something as beautiful as his subject matter’ (Roger Billcliffe, ‘Foreword,’ in, Vivien Hamilton, Joseph Crawhall, John Murray, London, 1990, p. xii).

Coats himself would play an important role in the development of Crawhall’s career, lending Cock Pheasant with Foliage and Berries (lot 5) and A Mallard Rising (lot 3) to the Rome International Fine Arts Exhibition in 1911. Over the next two decades, Coats and his sons, Thomas and John, would continue to include Crawhall’s paintings in exhibitions across the UK. The remarkably high prices achieved for his works at the famous Christie’s sale of the collection in April 1935 are a testament to the artist’s prowess. Writing in the Daily Telegraph at the time, C.R. Carter alerted prospective purchasers to this ‘big opportunity for the collecting world.’ As the vast majority of his works have remained in a handful of private or public collections since then, this sale represents a rare and singular opportunity for collectors to share in the creative majesty and patient observation of an artist seldom equaled and never bettered. 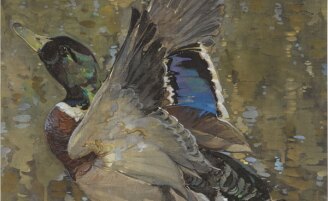