I n the upcoming Important Design sale in Paris on 26 May, all the great names of 20th century design are represented: Eileen Gray, Alberto and Diego Giacometti, Gio Ponti, Jean Royère, Charlotte Perriand, Claude and François-Xavier Lalanne. Alongside iconic furniture is a wonderful selection of vases, signed Gallé, Jouve or Boris Lacroix, whose beauty did not go unnoticed by florist Louis-Géraud Castor, who has joyfully filled them with flowers. Here, he tells us about the project.

How did this lovely idea come about?

Florent Jeanniard (vice-president of Sotheby's France and director of the 20th Century Design department) suggested that I do this and I simply couldn't resist. We have known each other for twenty-five years because before becoming a florist I was an expert and a dealer. He knows how much I love objects, especially vases.

In your store, you even suggest to clients that they purchase the bouquet along with its vase. Should the container be as beautiful as its contents?

Absolutely, that has been the concept since I started the business in 2017. I took my first steps with Francine Grünwald, who once said: 'I never offer a bouquet without the vase that accompanies it'. At the time, we were buying Besnard and Primavera for nothing. That remark has stayed with me.

Today I work mainly with Mathilde Martin who produces unique ceramic pieces for my studio. I will soon be offering glass vases coming from a craftsman in Kyoto and am thinking of an exhibition of 'archaeological' pieces by Alana Wilson. I am also very fond of the Finnish vases of Tapio Wirkkala.

They are all works of great sobriety...

Yes, I favor purity of form, in the spirit of Giacometti for Frank or Marguerite de Bayser.

References for those in the know. Are you a collector ?

I sold many things in order to get set up but I kept some objects for the beauty of their material: oak armchairs by Eyre de Lanux who is the subject of a book that I wrote, some quartz, some lacquer. A 'Croix' lamp in alabaster by Jean-Michel Frank.

Is there a vase in this selection that you would have liked to keep?

I particularly like the white vase by Jouve, in which I placed branches of Canadian Serviceberry. I imagine it placed on the floor, like a work of art. 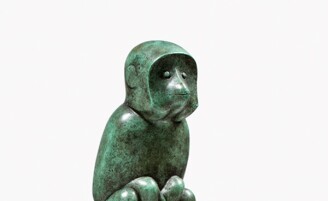