The Nike Air Ship and The Genesis of the Jordan Line

T he Nike Air Ship is a key part of the design legacy of the original Air Jordan. When Nike launched the Jordan line, they did it with a legendary ad campaign, now referred to as the “Banned” commercial. The camera focuses on Michael Jordan, in black and red practice gear, dribbling the basketball and holding it in his hands. Each time the ball bounces - there's a powerful ‘bang.’ An announcer says, “On September 15th, Nike created a revolutionary new basketball shoe. On October 18th, the NBA threw them out of the game. Fortunately, the NBA can’t stop you from wearing them.”

As the camera lowers onto Michael Jordan's feet - you see two shiny black and red Air Jordan 1s (now known as the ‘Bred’ colorway). It was a powerful and remarkable ad, and is famous for the brand that it helped catapult into history: The Jordan Brand. 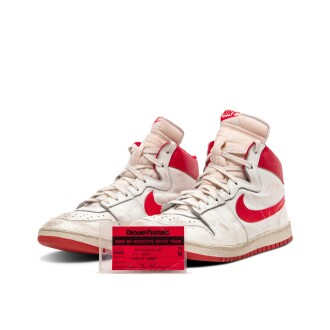 Perhaps the most remarkable part of the story is that the sneaker featured in the ad is the Air Jordan 1, but the sneakers that the NBA was concerned about were actually the Nike Air Ship in a custom black and red colorway.

To start at the beginning - in 1984, Nike gave Michael Jordan his own signature line of shoes and clothes, which was pivotal in Michael agreeing to sign with Nike. It was the first time the brand did anything like this, and it paved the way for many of the player collaborations we now see. The term “Air Jordan” was coined by Michael Jordan’s agent David Falk. David apparently came up with name because Nike shoes had air in the soles and because, of course, Michael Jordan played basketball in the air.

The Nike Air Ship is a key part of the Air Jordan brand genesis. When Michael joined the NBA, the Air Jordan 1 was still not ready for him. He preferred sneakers that were lower to the ground, where he could feel the court beneath his feet. In the process of creating the Air Jordan 1, Nike supplied Jordan a limited number of Nike Air Ships – some of which had “Air Jordan” or “Nike Air” printed on the heels. This pair, featuring just “Air” is an unusual variation.

The “Air Ship” – designed by Bruce Kilgore – was originally released in 1984, and was the first basketball shoe worn by Michael Jordan as an NBA professional. In the preseason and early games of his rookie year Michael wore a white and red colorway and also the black and red colorway referenced above.

What makes these sneakers so remarkable is that they are the earliest Jordan attributed regular season Game Worn pair to surface at market, attributed to Michael’s 5th NBA game. They were gifted to Denver Nuggets Ball Boy ‘TJ’ Lewis following the Bulls vs. Nuggets game on November 1, 1984. They are presented and offered with Mr. Lewis’ 1984-1985 Nuggets Staff Pass.

Unlike other versions that have surfaced at market before, these have a peculiar detail on the heel. In most examples that have surfaced previously, the heels say “Nike Air.” On this particular pair, they just say “Air” which is visible in pictures from the game on November 1, 1984. In very early games, Michael can be seen wearing this unusual model type.

Sotheby’s additionally has on offer in this same auction an Air Jordan 1 that was manufactured for Michael Jordan, but remains unworn and in immaculate condition. The coding on the inside of the shoes states "850204 TYPS.” TYPS stands for “Tong Yang Player Sample'' and means that the shoes are ‘Player Samples,’ made for Mr. Jordan.

Sotheby’s is proud to have both of these pairs on offer as part of the MGM x Sotheby’s collection, and to honor the remarkable legacy of Michael Jordan.