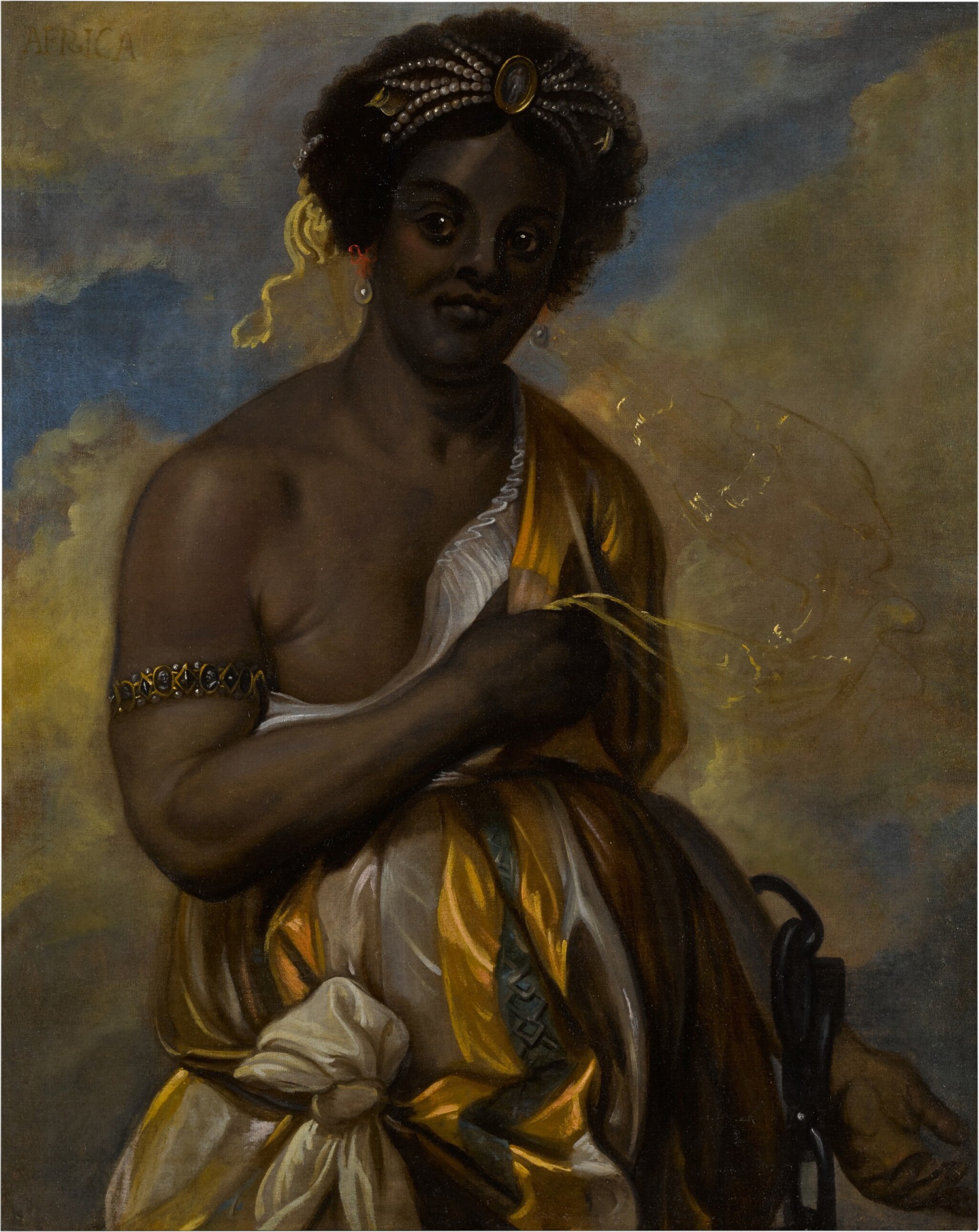 To request a condition report for this lot, please contact Alison.MacQueen@sothebys.com.

A black woman is depicted three-quarter length before a cloudy, luminous sky with her right arm drawn across her breast. She is wearing a headdress of white pearls inset with a miniature of a winged Amor, a bejeweled armlet, a silk dress striped in white, gold and green silk drawn into a knot and worn over a Venetian-style white chemise, leaving her right shoulder exposed. In her right hand she holds a transparent gauzy veil emanating from her headdress, forming a counterpoint to the heavy chain which manacles her left arm.

Around 1650, Jan Boeckhorst executed at least two versions of the present compsotion. One is part of a series from German private collection illustrating the allegorical subject of the Four Continents, while the other is in the Hohenbuchau Collection.1 The present painting appears to be an autograph version by the artist, and belongs to a different set from the two discussed.2

In Elizabeth McGrath’s view, Boeckhorst has created an original conception of a black woman.3 She concludes that the image is unique among representations of the Continent in this period, further speculating that the chain worn by Africa might be an allusion to "the slavery practiced within and upon black Africa."4 However during this period the overt reference can hardly have been to the Atlantic slave trade: rather it denotes the enslavement of Africans by the Turks.5 The specific source for Africa is, according to McGrath, Titian’s Portrait of Laura Dianti, Mistress of Alfonso d’Este, with a Black Page. This painting could have been known to Boeckhorst through an engraving by Aegidius Sadeler II (1570-1629). Another source of inspiration could have been the print of Agrippine Sibille, from a set of twelve engravings by Gilles Rousselet (1610-1686) and Abraham Bosse (circa 1601-1676) after Claude Vignon (1593-1670) that was published around 1635-1640 and copied by Pieter II de Jode (1606-1674) in Antwerp.6

2. Elisabeth McGrath (Warburg Institute) as well as Boeckhorst expert Maria Galen have previously endorsed the attribution on the basis of photographs in 2017.