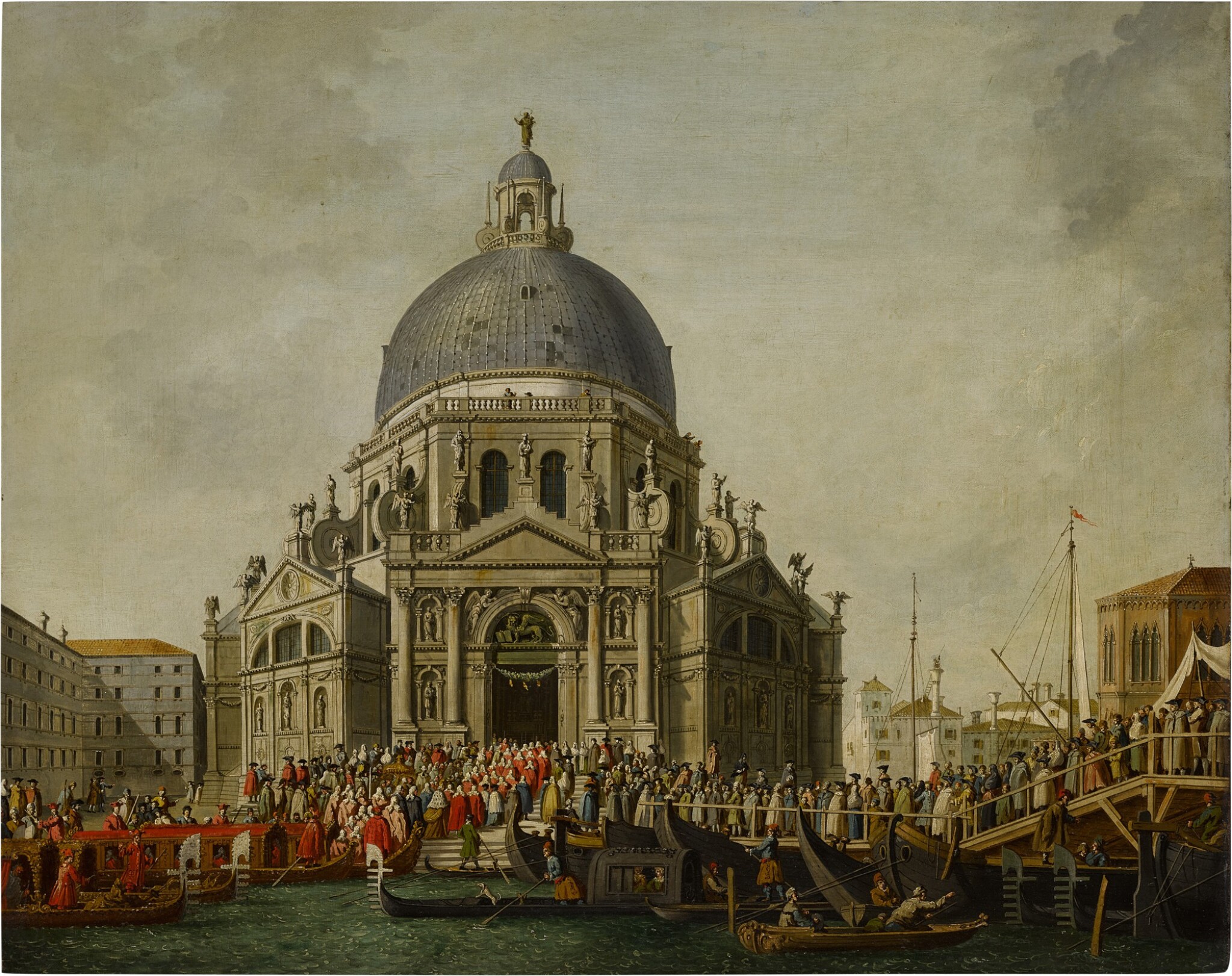 The canvas has an old glue relining and is planar and stable under a varnish which has dulled over time and is slightly dirty. The colors remain vibrant and overall the painting has a bright, fresh presence. There is a subtle craqueleure pattern throughout which is more noticeable under raking light and in the lighter areas of the sky. The details in the foreground are well-preserved. Ultraviolet light reveals a milky varnish and just a few small areas of restoration in the sky, mostly concentrated along the upper edge. Overall the painting is in good condition. Offered in a carved giltwood frame.

Thence by descent to his son Hughes Ingram (born circa 1800);

Thence by descent to his nephew Alfred Hamilton Godfrey, Esq.;

There acquired by R. Langton Douglas (1864–1951), former director of the National Gallery, Dublin;

By descent to his wife, Mrs. Jean Douglas, New York;

From whom acquired by the late owner in 1955.

This painting was originally part of a group of at least eight works which were acquired in Venice by the Englishman John Ingram, who was a patron of Francesco Guardi in Venice before moving in 1819 to Palazzo Mignanelli in Rome.1 Indeed he and his family were quite entrenched in the Venetian art world as it is recorded that his daughter Augusta was a pupil of Francesco Novelli before she married John Godfrey and moved to England.2 The set of Borsatos, along with Ingram's entire collection, were passed on to his son Hughes and from there to his nephew, son of Augusta, who was living in the Godfrey family home on Brook Street in Kent. Along with some of the Guardis from Ingram's collection, the Borsatos were ultimately offered for sale by their descendant Alfred Hamilton Godfrey in London in 1929, sold as four lots each with a pair of scenes by Borsato. The present painting was paired with a depiction of The Courtyard of the Doge's Palace, Venice, with figures, and acquired at that sale (along with the other three Borsato lots) by R. Langton Douglas, a scholar on early Italian art and the former director of the National Gallery of Art in Dublin.  He eventually settled in New York with his third wife, Jean Douglas, who inherited the paintings and sold the present one to the late owner in 1955.

The group was sold as by Giuseppe Borsato in 1929, and in 1955 W.G. Constable, then a curator at the Museum of Fine Arts, Boston, indicated in private correspondence with Mrs. Douglas that the attribution to Borsato was likely.

1. His move from Venice to Rome is recorded in a letter dated 4 May 1819 from the Austrian Governor of Venice to the Secretary of the Venetian Academy granting permission for Ingram to remove his paintings by Guardi from Venice (after the Secretary had originally objected to their departure). See F. Haskell, "Francesco Guardi as Vedutista and Some of His Patrons," in Journal of the Warburg and Courtauld Institutes, vol. 23, July - December 1960, pp. 271-2.